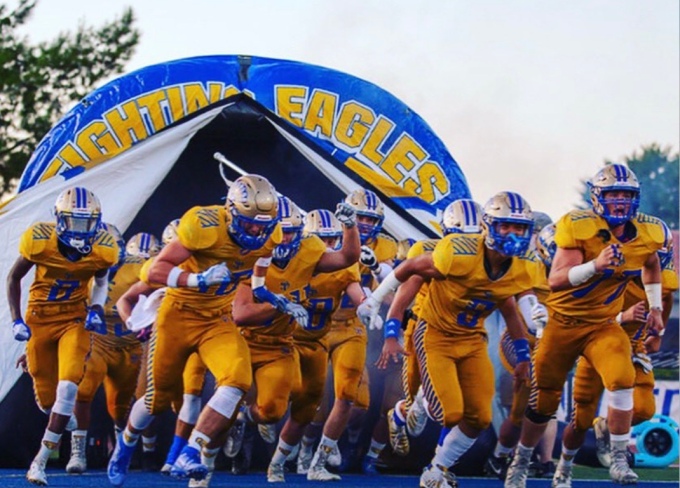 Overview:
Coming off a 9-1, league championship regular season and a loss to D2 champions El Camino in the playoffs, the Fighting Eagles have to replace the Valley League Offensive and Defensive Players of the Year, Trevor Jungman and Johnny Vega, as well as the league Kicker of the Year, Liam O’Callaghan. Instead of hitting a rebuild, the Eagles are just looking to reload. A good core of returning All-Leaguers match up well with the underclassmen and a couple of key transfers to put the Eagles back in contention for another Valley League Championship and run at the D2 title.

Offense:
All-League honorees Ethan Fleming (OL) and Luke Wilson (HB) return as starters. Senior Joey Chappelle, who started at WR last year, will compete with Junior Danny Davis for the Quarterback spot. Both are good athletes and fierce competitors. Chappelle, a hockey player, has great toughness and agility. And Davis, the shortstop on the baseball team, has tremendous athletic ability and arm talent. Regardless of who takes the first snap, both will play major roles on the Eagles’ offense. Senior Ricky Rodriguez, an athletic, bruising runner, will step into the feature back role at fullback and will be running behind a solid offensive line. That line, led by Fleming, 6’2” 265lbs, includes heavyweight wrestler Victor Guzman, the swing tackle last year, and junior Justin Phillips. The Eagles have produced three different All-CIF Offensive Linemen in the last seven season and coaches believe the 6’2”, 295lbs Phillips has the ability to be the fourth in eight years. Intriguing Texas transfer Zyeir Smith brings size, 6’3 285lbs, and intelligence that pair well with quick Tackle Adam Badr. Wilson, 6’1 185lbs, will get carries behind that OL and poses a receiving threat out of the backfield after averaging over 17 yards per catch last year. Senior transfer Mathew Torres provides a good frame, 6’2, 180lbs, route running and natural hands. He’ll be joined in the WR core by Seniors James Debora, Ty Milner and Danny Mireles. Along with the Juniors and Seniors, Sophomores Wes Parker, Noah Snyder, Jakob Blanchard and Jack Andrews have put in tons of work during this bizarre offseason and have the physical ability to play at the varsity level if their number is called.

Defense:
The Eagles return All-League players at all three levels of the defense. In the secondary, Senior FS James Debora is a great open field tackler and understands the scheme very well. Debora, who is also one of the best punt and kickoff returners in the county, will see some time at slot receiver and potentially play man corner when Coach Corley decides to use Junior Tanner Wrzeski, 6’4 190lbs & the goalie on the Eagles’ Open Division Soccer team, at safety. Ty Milner, who also plays WR, will play one CB spot, a duty he took over the latter part of the 2019 season. Senior Alex Moore was an All-League LB last season and plays the Eagles’ OLB/SS spot as well as anybody. A sprinter on the track team, Moore is a very smart player who will see some time as a slot on the Eagles’ offense. Senior Brian Huerta looks to step into the shoes of the graduated Johnny Vega and fill the Rover role in the middle of the Eagle D. Sophomore Kyle Hardi has been a pleasant surprise for the Eagles and is pushing to take over the other LB spot next Huerta. Up front, the Eagles are led by “El Monstrou”, Junior Armando Godina. An All-League Sophomore last year, Godina, 6’2” 245lbs, sets the edge at DE. Strong and physical, Godina has spent the offseason working on his craft and improving his pass rush technique. At the other DE, Senior Chris Faraguna is a solid technician and tough match up for any Tackle one-on-one. Bakersfield transfer Andrew Batalla, a 5’11”, 240lbs sophomore, has tremendous lower body strength and agility for a young man his size. Batalla’s freshmen tape, some at the varsity level, is impressive and he’ll look to start at DT for the Eagles.